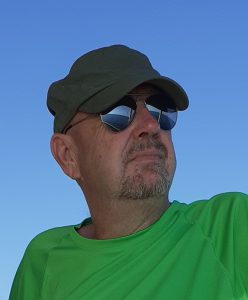 I was born in the corner of the living room, behind the TV. So said my father many times, and the family agreed whole heartedly. That seems to have set the tone for the rest of my life. In the corner or behind the TV, what is officially known about my birth is that it took place in England to working class parents.

My mother inspired me to write, Doctor Who and Isaac Asimov inspired my love of science fiction, Monty Python inspired me to be silly and I blame Billy Connolly for my infrequent bursts of bad language.

After an uninspiring bout of education at Grammar School, I failed my GCSEs miserably. I blamed it on too much revision and not enough coffee – yes I was addicted at an early age.
After a number of years working in an office and gaining the giddy heights of special director at the age of twenty-two I did what only a child of indeterminate birthplace could do, I resigned. Personal computers had just been developed, and I wanted to buy one to become a writer. So I got a job in a warehouse shifting boxes. It paid better than office work and I could use my brain to write stories in between tea-breaks. That was forty years ago. Now, after forty years as a computer programmer, I have finally come full circle and have started a career in writing.

I may pop my clogs tomorrow, but I have managed one thing on my list of things to do before I die, writing and publishing a book.

I currently reside in the Republic of Cyprus with my wife and two mad English Springer Spaniels.