These chapters posted on my website are all first draft. Please bear in mind storylines may change.

At the fortified outpost of Ouvrage Schoenenbourg, part of the fortifications that made up the Maginot Line, the Germans were playing with Capitaine Bertold’s small company of French soldiers. Bertold suspected snipers were playing games, seeing who could put a bullet closest to one of his men without hitting them. It had been going on for days and so far, luckily, nobody on his side had been hurt.

He had to be seen to be defending the French border, mainly because of the American journalist in place in his unit, but also for the wider French and world audience. Bertold realised it was a waste of time. German armour and artillery was so powerful, it would destroy the likes of his small fortification in a matter of a few hours.

“What a waste,” Bertold muttered as he sheltered from the German pot-shots. The tree he was using as a shield and the small grassy depression were probably used by a French soldier in 1914, the last time the Germans attacked in force.

“What’s a waste,” a deep voice, speaking French, but with a distinct American twang to it.

Bertold turned his head back, making sure he kept his profile as flat as possible. He was greeted by Nader’s broad smile. “What are you doing here, Monsieur Nader? I told you to stay back at the fort, inside it, not wandering around.”

“I’m a war correspondent, Capitaine, I write about war, not campfires and burning sausages.”

“Burning? Francois!” Bertold immediately forget the threat of the German snipers and started bellowing for his cook. “Where are you? You damn fool! You’re burning my sausages. You’re not a cook, you’re a murderer!”

“Don’t worry, I took them off the fire. They’re fine, just a little singed. My momma was a fine cook. My grandma, though born a slave, was an even better cook. I come from a long line of great cooks.”

Bertold settled back and turned fully towards Nader. “Your family were slaves?”

“Of course. I’m a negro. I didn’t come from a long line of settlers, my folks were clubbed, chained, dragged, drugged, and transported against their wishes. We were stock, herd animals, chattel to be bought, worked, and sold.”

Bertold was aghast at the thought. “It is wrong, yet you say this so matter-of-fact.”

“What do you want me to do? Sugar coat it? No, my friend, it is what it is. No point ignoring it, like the way you’re ignoring the German over there.”

Bertold saw Nader’s nod and twisted to look round. A German soldier in full canvas combat gear stood up, took another pot-shot, turned, and disappeared.

“Why didn’t you shoot him,” Nader asked.

“I don’t want to kill anyone,” was Bertold’s surprising answer.

Nader shook his head. “This is going to be an interesting war when it breaks out.”

“Exactly! We are not at war and so far, nobody is hurt. So, we sit and wait until our Generals tell us to fight, to kill.”

Nader smiled. “If you say so,” he said, patting under his left armpit. “But I’ll just keep my trusty Colt loaded and ready in case the Germans missed the news we are not at war.” 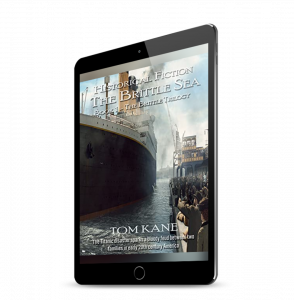